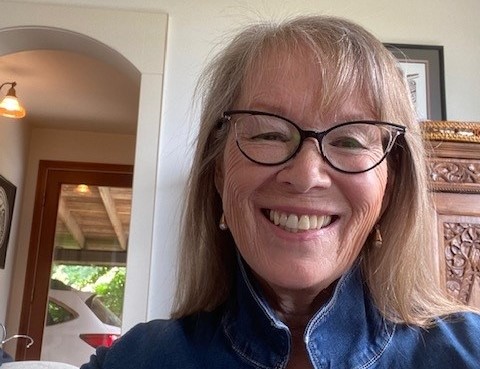 It is hard to pinpoint exactly what part of Kella’s life is the most special these days.

It could be the property she lives on, overlooking the Salish Sea off Vancouver Island’s central eastern shores. Tall trees framing her own little beach, a blanket of white sand perfect for walks or organic tanning sessions. The creek meandering through the more than six acres of lush temperate rainforest makes a soothing soundtrack for early morning meditation.

It could be her relationship with her four grown children, or her husband, or a collection of grand kids. The inventory is pretty darn nice. Her health is good, she’s spiritually fit, and she has a gratitude list filled with important items.

If you are one who thinks people in long term recovery often forget where they come from, then you haven’t met Kella.

Nearly 19 years after arriving at Edgewood, she still remembers the centre’s impact. How her friend drove her the 90 minutes down Island, how “as we turn the corner onto Boxwood, I hand her my little purse size bottle of pills. And when we get there, I give them my bigger bottles.”

Once she was in the building, how offended she was by the clothing exchange that required her to be nude in front of a female staff member. How the detoxification process slammed her like no other time in her life, and she had already been through a lot. Belts as a child. Car accidents. Guns and sexual intimidation. The death of a husband, the unenviable position of becoming a widow with four young children.

No, it is inaccurate to think just because someone has years in recovery, they can’t get quickly back to the moments of clarity, the desperation, the Four Horsemen of terror, bewilderment, frustration, and despair. Morphine withdrawal is just not a forgettable experience.

“It was July, and I was walking around with a blanket on. Suddenly it would feel like there was 1,000 needles sticking in my arm. I would be ripping off my blanket or whatever jacket I had on. It felt like there were worms crawling through my legs. It was pretty awful. It was the most physical pain I had ever suffered in my life,” she says.

To meet Kella, one does not instantly think of the carnage of addiction.

She is elegant in attire, in how she holds herself. She is soft spoken. But don’t let first impressions of this grandmother fool you. She’s been around the block. She is exactly the one you would want in your corner in a jackpot.

Born and raised in in and around Vancouver, B.C., Kella is 67. She is the third of four children her parents raised. The tension in her house was often based on the collateral anger brewing between she and her parents. Her dad was army veteran with drinking and gambling issues, her mother a stay-at-home mom with challenges of her own to do with medications and a  host of hard partying girlfriends. The drinking was frequent and heavy, and the struggles in the home left her with traumatic memories. The belts. The raised voices. The time her mother accidently shot herself in the arm with a rifle while threatening an encyclopedia salesman who dared make an evening cold call at the front door. It was not your typical baby boomer upbringing.

By 15, Kella was also drinking, sampling the substances of the times that were so prevalent in the 1970s. Beer. Wine. Pot. LSD. Before high school was completed, she found herself starting a series of untenable relationships with older men. One took her to New Zealand for a year, putting her senior school year on the shelf. She would return, go back to school, and found herself studying to be a dental assistant in Nanaimo. One night she was invited to a house party in Comox, a town 90 minutes north of Nanaimo. There she met her husband, George. He was a successful commercial fisherman, and quickly they fell in love and began to raise a family. More than 40 years later, she still lives in that house.

They fished together, traveled together, lived life high and fast. Their drinking was sporadic but frequent. Expensive liqueurs and wines. Their love was strong, boisterous, and colorful. The swashbuckling, hard labour life of a fishing family.

“You know, I like to portray myself as being a pristine lady,” she says. “But I am one of those West Coast girls that fished with a baby in a backpack, hanging over the stern, plunking fish on the head all day long and hauling them aboard. That is the reality.”

Together they would produce four children in five years.

She was not a dramatic drinker, but it was a factor in her day-to-day life.

“The thing is if I drank a lot I would just sneak off to bed. I would just go to sleep. I was a really boring drunk. That was typically my pattern. I would pretend I was going to check on the kids and I would just never come back.”

One day Kella slipped coming off the boat and landed on her back. She was introduced to a series of painkillers and they, along with the alcohol, became the substances that would lead her to Edgewood. By the end it was slow-release morphine.

She drank and ate pills constantly. Despite crippling headaches caused by her reaction to certain liqueurs, she kept going. Black outs were part of the equation. She drank to be able to sleep.  The headaches were horrid, “lightning bolts going off in my head. They were really bad.” She would end up in hospitals looking for solutions.

Meanwhile, her husband was often fishing off the coast of north Vancouver Island, or Haida Gwaii. He had even named the vessel, a 14-metre gem built to catch salmon and halibut, after his bride, the Kella-Lee.

In October 2001, George was out fishing off the rugged north coast of Vancouver Island. Kella was awoken in the middle of the night by a phone call from the Canadian Coast Guard. They had received a May Day call. The boat had lost its steering and was floundering in hurricane force winds.

“I just jumped out of bed, like my God. I am freaking out and panicking. I know what the word Mayday means. He is not going to send out a call like that unless lives are in danger. Oh my God I have got four kids. Oh my God how am I going to look after my kids? How am I going to feed my kids?”

She phoned the wives of the other crew members and waited for more information.

There was to be no happy ending for her. The RCMP came to the door with the sad news. Two crew members survived, while two others, including George, did not.

Kella found Ativan to go with the morphine, put pills under her pillow and tried to survive in the way she knew how. Over the next year and a half, friends began to confront her. She was scaring her children, and they told her so.

One day she had had enough. Friends were willing to look after her children. Treatment was offered. Edgewood was far enough, yet close enough, to make sense as a destination. And the ride down Highway 19 to Nanaimo, as difficult as it was, was the start of Kella’s new life.

Today, nearly two decades later, Kella is in her comfort zone. Sharing stories with a friend over lunch, while her grown kids host a yoga retreat at the house, a few blocks away.

She points to her aftercare plan as one of the key reasons she has remained sober all these years. She stayed in aftercare for two years, attending meetings at the centre every Friday, calling in randomly to talk to support staff when she felt alone, calling just to say goodnight even when on holidays.

Her spiritual life grew from the day she got to the centre known by so many as the House of Miracles.

“In the mornings in treatment I would go up to the terrace up there and pray. I would read the Daily Reflections and I would pray. Nobody disturbed me one iota,” she says with a smile. “I smoked my cigarettes and drank my coffee.”

She is a 12-Stepper through and through. Has had a temporary sponsor for all 19 years, acts as a temporary sponsor to the many women she has taken through the steps. She has a home group, and attends two or three meetings a week, one online, two in person.

Still very much afflicted with a travel bug, Kella has been to meetings in Germany, in England. She has been to International conferences in the fellowship, both in Canada and in Mexico. She regularly goes to Mexico and has a home group there, along with a collection of close friends. Four years ago, she married a long-time friend, Harvey, also an Edgewood alumnus, and also a man in long term recovery. Life is pretty good for Kella these days and she knows it.

She is not one to harbour resentments long. She has the Steps of the 12 Step movement to help her deal with them.

There is a promise 12 Steppers love, found in the Big Book on page 83. It assures people who live in the fellowship “will not regret the past, nor wish to shut the door on it.”

In Kella’s case, her past is wide open.

“You know what, about a month ago I was in the grocery store and my old doctor, the one who was my drug supplier, says to me in an isle in the grocery store, “I am really sorry about what happened Kella. They really encouraged us to put people on those.”

“I looked at him and said it is not your fault, John. Have you ever tried to say no to me when I want something? Not going to happen. So, I told him I forgave him.”

In the end, she understands how her choices combined with her DNA to lead her down a path she had no business being on.

“I was never a bad person. But I was very sick. Very sick. After I had gone to treatment, I realized it. That I wasn’t a bad person. I was just sick.”

Now she lives for today, in the moment, and for the most part, those moments are grand.

“I love how when I went into treatment, I was a super negative person. I came out being able to make a positive about any situation. That is what I love. You can’t keep it for ever, but I try.”