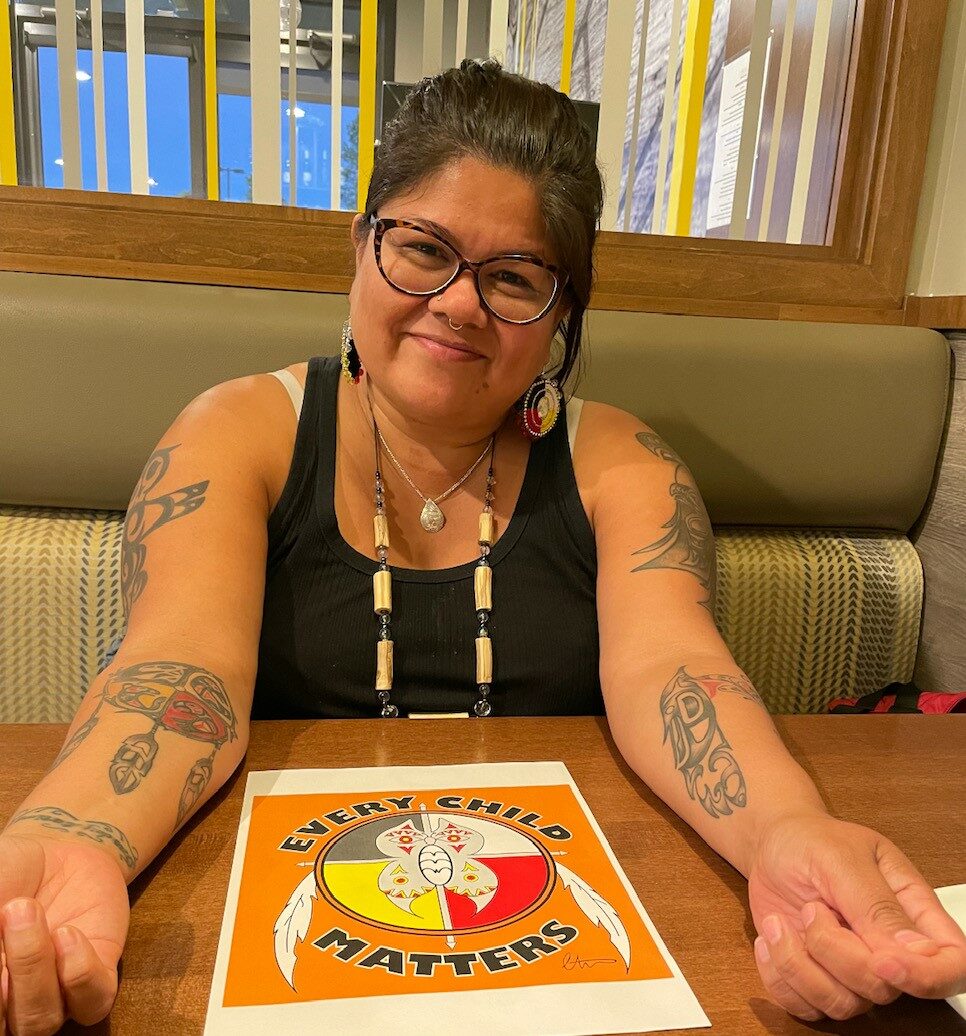 Just a few weeks before Orange Shirt Day once again reminds a nation of the importance of its past and the obligations of its present and future, Mary H.’s story, the illustrations on her body and the poster she displays speak volumes.

The significance of Orange Shirt Day, the National Day for Truth and Reconciliation is set for Friday, September 30 this year. It is a day not lost on the Edgewood Health Network. Across the network, facilities and their staffs will be hosting groups and events to commemorate the day, its cause and the responsibilities that come with it.

Mary is an obvious example. As a clinical counselor at Edgewood in Nanaimo, an 80-bed inpatient treatment centre, she is a conduit from the indigenous people of this land to the current dwellers, helping patients and staff understand the issues at hand, the prejudice that exists to this day, the intergenerational trauma indigenous people face, and need for reconciliation.

Both her parents are residential school survivors, her mother from the now infamous Kamloops Indian Residential School, once the largest such school in Canada, where  the remains of at least 215 children have been found on the property of the facility which operated from 1890 to 1969.

Her father was a Day Scholar from Kitkatla, B.C. near Prince Rupert.

“My mother is Shuswap, and my father is Tsimshian, so I am 100 percent indigenous,” she says quietly, proudly, as she explains her path to recovery and then to Edgewood.

Mary is approaching a year at the centre known by many alumni as the House of Miracles. It is a fitting place to work given Mary’s own story.

Raised in Prince Rupert, her early life was chaotic and difficult.

She grew up one of four children in a low income, alcoholic home. It was a life filled with loud voices and fighting and the frequent presence of social workers. She spent considerable time living with her grandparents in nearby Port Edward. Her parents found recovery after Mary left home. He has been sober for over two decades, finding refuge and recovery through the church.

That was not to be Mary’s trail. She found alcohol and other substances before her teenage years, and it led her onto a violent and tragic path. More social workers. Transition houses. She had her first of three children at age 17, and though she stopped using substances through her pregnancy, she was soon back at it. As a result, her mother was mostly the primary care giver of her first born, a daughter, for her first five years, while Mary went off the rails. Her consumption ran the gambit from alcohol to smoking crack and other highly addictive substances.

A second child was born, a boy, who lives with his father. That was not enough to get her sober either.

One day in June 2002, she was involved in a vehicle accident that claimed the life of her best friend. The trauma from that accident haunts her to this day.

“I made a promise to her so many times that I wasn’t going to let her death be for nothing.

“I was on the floor, there was puke everywhere. I woke up and I was like holy shit! I started crawling around … my daughter (who was 15 at the time) picked the lock to the bathroom and came in. She was like ‘You are pathetic! Every weekend, same fucking thing over and over again. When are you going to get tired of this? I am the child you are the adult. Time to grow up!’ She stepped over me, used the washroom and left. I cried…”

She pondered suicide. She had lost friends and relatives to that way out and knew the legacy that final solution leaves behind. In her moment of clarity, she called her father.

“He said when you are ready come over and we will talk. I waited a couple of hours, sobered up some more. I ate, showered, and went over to my dad’s. I got real with him. I told him I am a drunk. I am a drug addict. I don’t know how to stop, and I am going to die. The doctor told me three months before that if I didn’t stop, I was going to die. My liver count was bad.”

He father took her to a meeting of Alcoholics Anonymous. It was not her first meeting. But it was the meeting when she was finally ready. She has not had a drink since.

Mary’s recovery included going back to school, then marching through doors whenever they opened, as they often seem to for those who commit to recovery. She would finish her high school, go on to achieve a Bachelor’s in Social Work.

It was not all smooth sailing. Trauma is a patient foe. Three years into her recovery, the tension between her and her son’s father got to a point where she was basically mandated to treatment. She went into inpatient for almost two months. It was there she realized how her spiritual path, her indigenous roots, and her recovery were all connected and very much in need of work.

“It was an indigenous treatment centre, and it was to deal with my trauma from my upbringing and the car accident. It was kind of a gift because I had always wanted to go to a treatment centre, but I never did. I needed something to push me into it, so I ended up going then. It worked out really well with what I am doing now.”

She shows a tattoo on her arm.

“This is my design, and I put it on a drum. I took that drum into the sweat lodge with me every time I went in there.”

When she left, she was more committed to her path of recovery and to the truth of her people than she had ever been before. She ended up moving to Nanaimo to be near her son. Five years ago, her last child, another boy, was born. A recovery baby.

Mary found herself working at an indigenous healing centre in Lantzville, where the staff and elders taught her much about her cultural practices and traditions. She became a strong advocate for indigenous issues.

“I did a lot of things at the healing centre that were really cool. I helped organize the 60 X 60 walk for Missing Murdered Indigenous Women, Red Dress Awareness Day. I helped organize a T-shirt logo contest; there was a website made up that I helped put together to save our jobs when covid hit. A help line for residential school survivors, Day scholars, MMIW, anybody who could go under that we would help them.”

Nearly a year ago, she was asked to help Edgewood do a better job of reaching out to its indigenous patients and began that path.

Every Wednesday afternoon, Mary facilitates a group for anyone who self identifies as Indigenous. That usually means eight to 12 people. They often leave the property in a van with Mary at the wheel.

“We go out on the land. I usually bring them hiking, to some place cool like a waterfall. I give them water teachings. A medicine introduction, including a cedar brushing, you pray by the water and usually, we end up smudging after.

“I always tell them this is our land healing. Before colonization, before white people came over, we had our own form of church. Our church was outside. So, when we pray, we are going to do it outside and we are going to use the land, to take whatever negative energy that is on us, whatever traumas that we are letting go of, we are going to let the land take it from us and we are going to do it this way. It is usually washing with water, usually from the waterfall. Wash their face. I will give them a teaching, like of cedar. And whatever medicines are around, we will talk about things. Like spirituality. Or if they know anything of their language they can share it, or any kind of stories that they have about being out in the bushes. We walk together and this stuff all comes out when we are walking. It is walking and counseling all at the same time. They love it. When we are done, we go back to Edgewood.”

“But we don’t always go out on the land. I do crafts as well. I do dream catchers, I do paddle making, and medicine pouches.”

One of the sessions resulted in a stunning poster created by a patient just in time for Orange Shirt Day. Mary holds the poster up for inspection.

“That is why I asked him to make this. It is a medicine wheel. Physical mental emotional spiritual, the earth fire wind and water, spring summer fall and winter, the child youth adult and elder, and then the circle that goes on forever. And we sit right in the middle. I had the butterfly put on to represent transformation,” she says. “And this is MMIW. It ties everything all in together. I like to think butterflies kind of represents youth, too. Children.”

“You know, I worked at the Kamloops residential school after the 215 children were found. I did debrief counseling, sometimes for up to 800 people a day. There were people flowing in from everywhere. It was like a tourist attraction after they found all those children. That is the school my mother went to.”

Mary is still learning the ropes of the “Edgewood way”, under the tutelage of veteran counselor John Marshall. She has her struggles, she has her little victories, one day at a time. She is attending over a dozen recovery meetings a week, in person and on Zoom, and with her recovery and her vocation she is clearly making a difference in the world.

She closes with a tour of her tattoos.

“These ones are my kids. This one is the butterfly. I like the butterfly because my friend that died, she had butterflies tattooed all over her. This was just kind of like her in indigenous form. This one here is a feather that I did for my little boy.”

In the end, the circle has come together for Mary H. at Edgewood.