Hurricane Emma – A Force To Be Reckoned With

Hurricane Emma – A Force To Be Reckoned With 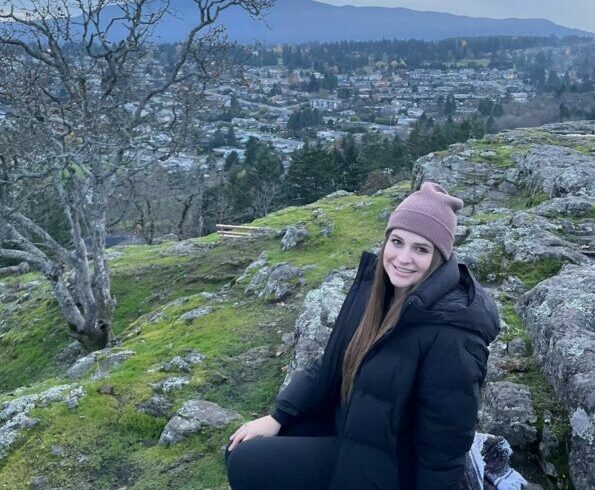 If you look up the word hurricane you are sure to find a collection of descriptors which include the words storm; spiral; force; dangerous.

Nowhere does it say Emma. Or addicted. Or alcoholic.

But in Emma L. ‘s case, the nickname “Hurricane Emma” fit perfectly when she arrived at Edgewood Treatment Centre in the middle of COVID in March 2021.

A year later, the descriptors don’t fit any more. Emma is clean and sober, no longer a storm in anyone’s life. She is happy, joyous, and free these days.

Born and raised a proud Winnipegger, Emma was just 23 when she arrived in Nanaimo on  Vancouver Island for treatment. She was no stranger to the language of recovery, however, having been in and out of four centres and countless recovery rooms.

Unlike many tales heard in the rooms, or captured for the cameras and newspapers, Emma’s story doesn’t feature a broken home, single parenting, social services, or the like. She comes from a solid two-parent, two kids upbringing. Her parents were white collar professionals. She has a sister two years older who loves her to pieces. In other words, she had every reason to not be mood altering.

But the disease of addiction doesn’t care where you come from.

Indulging experimentally as she turned 13, it was a love affair from the start.

“Once I started drinking it was every weekend. It was all I could think about all week. I was just so excited for the weekends,” she says. “When I was drunk and high, I felt powerful. I felt on top of the world. That no one could stop me.”

Early use led to risky behaviours. It led to moving past the experimental phase and into the progression of the illness. From alcohol to weed, from powder to pills, the snowball rolled and grew. Along with it came the lifestyle — assaults, bullying in person and on social media, car accidents, and deterioration of relationships and her academic life. Hobbies such as writing, dance, and soccer slid by the wayside, while good friends were swapped out for dubious ones.

The love affair with her substances was on.

She helped herself to the family’s alcohol supply, “stealing it from my mom’s cabinet and watering it down. By the end of high school all her vodka bottles must have just been water by then,” she says with a smile.

“I remember one time they put a bottle of Grey Goose in the freezer, and it froze completely. They were like, okay, something is going on here.”

By high school and into university, she was “putting it in a water bottle to take it to school.”

She graduated high school and was in the process of being bounced out of a pair of universities when the family had enough, and she was given the hardline of get to treatment or get out of the house.

The “do this or else approach” left Emma feeling bitter, like “I was there against my will. I was dragged there by my parents like this is your only choice. I did not want to go. I was really upset.”

She went back to treatment, but left early, sliding into a five-year spiral of an in and out, sober and loaded, crash and burn existence.

“It was this vicious cycle of being sober for a few months, throwing myself into AA and NA and then fizzling out and going right back down that road.”

A third time through treatment led her to more understanding of what she was up against, and even the cessation of opiates, hopefully forever. But alcohol is a subtle foe. And patient. A few months after getting out, she was back at the bottle.

“I would go to AA for a few months. I would be like, okay, I am good now. I am stable now. I can have a few drinks. Each relapse got worse and worse.”

She remembers her last drink, or at least her last relapse, as a key moment in her path to recovery.

“I woke up in one of my friends’ guest rooms and I had no idea how I got there. She wasn’t even at the party with us. No recollection of how I got there, who drove me there, did I drive? Where is my car? This is really bad if I can’t even remember where my vehicle is,” she recalls.

“I found my vehicle. I drove straight home and just saying ‘please. Please. I need to go to treatment. I need help. I cannot live this way anymore. I am going to die.”

The storm that was Emma L. arrived in Nanaimo March 15, 2021, although not before being cut off from multiple restaurants and bars enroute.

“I always think of the bartender at that restaurant. I had my two suitcases, because I was like a diva, had to bring a thousand things. I go into the restaurant like, woohoo, I am going to rehab!  I always wonder … does she wonder where I ended up? And then I get to Edgewood, I was being carried in, puking, falling downstairs, just making a fool of myself.”

Her early days and weeks were bumpy, to say the least.

“It took me a while. Every night, I was like, get me my suitcase, I am leaving, for the first two weeks. All the staff were very good to me, and I was really horrible to them. People called me Hurricane Emma because I would tear through the place and leave a big, huge mess behind. I would tear through really quickly, but the mess would take a long time to clean up. It was something else.”

Fourth time lucky? Perhaps. Whatever happened to Emma at Edgewood was enough to give her time to find herself.

“Joel and Lauren really took my abuse; I was in their office like every day, because I am having a meltdown.  On multiple times it was almost like you can’t be here anymore. But Lauren just really didn’t give up on me no matter how many times I yelled at her.”

And she gives high marks to her counselor, Jamie, who was ”just so incredible, so awesome.”

As her storm began to subside, the staff and her peers did teach her just that. Through the inpatient and extended care programs, she did her personal work.

With its strong focus on trauma, Edgewood was the place where Emma began to unpack her pain, and face things that had happened, and how she had dealt with them. “Extended is where I did most of the heavy lifting,” she says. “The 50-day-program was just me stabilizing myself and stopping having meltdowns almost every day.”

Over four months at Edgewood, Emma faced eating disorder issues. She attended art therapy, lectures, group therapy, 12 Step meetings, you name it, she did it. She learned that much of her problem had to do with avoidance of her feelings.

“I didn’t want to feel. I didn’t know how to feel. Drinking for a while was almost how I survived. I just couldn’t feel my emotions. It wasn’t until after Edgewood where I was okay, I don’t want to drink.

And as the winds of her own personal war began to die down, she joined the fight for her life.

“So many nights I said I wanted to leave. I watched people leave. I don’t know … I felt a sense of belonging at Edgewood and I saw how hard people worked for me. Seeing that no matter how I acted they did not give up on me, just made me feel safe. I kind of felt like they fought for me until I could fight for myself. That was just huge.”

A year since her arrival at Edgewood, Emma is a different woman. Her relationships with her parents and sister are at an all-time high (she recently went on a family vacation with them), she has her own apartment, goes to bed early, gets up early, attends several meetings a week and meets with her therapist at least twice a month. She is giving rides to women in the extended care program, chairing meetings, and recently told her story at the centre which launched her new life.

She is a full-time teacher at a school for children with special needs.

“I am a teacher in a class with boys with autism. It is an amazing job. I do behavioural intervention one on one.”

Now well into her second year of recovery, Emma has a little bit of time to reflect on. She remembers what it was like, what happened, and what it is like now. She has a one-year medallion to remind herself of what she has accomplished.

“I definitely would never tell someone the first year of sobriety is easy. You are going to have really hard days. It can be just about protecting your sobriety on those days,” she says.  Meetings are the answer for many of the grey days, she says.

“I love meetings. I think that they are very therapeutic.  Even if you are having a bad day, and you hear someone’s story of hope, it can be like okay, this is why I am doing it.”

She lives in paradise, hikes and soaks in the beauty around her, with a clean mind and spirit.

“Today I am just grateful. I go through every day feeling grateful. That is really important to me. To just have that gratitude every day and remember why I am doing this.

It is April 2022. The storms have subsided, the wind abated. Emma looks back on her life and understands a lot more about herself today.

“I remember around the Hurricane Emma phase, one of the counselors was like, “do you realize a hurricane is a powerful force? If you use that for good, imagine what you could do?” I remember that all the time. I want to get a tattoo of it. I am going to have to do that one day.”