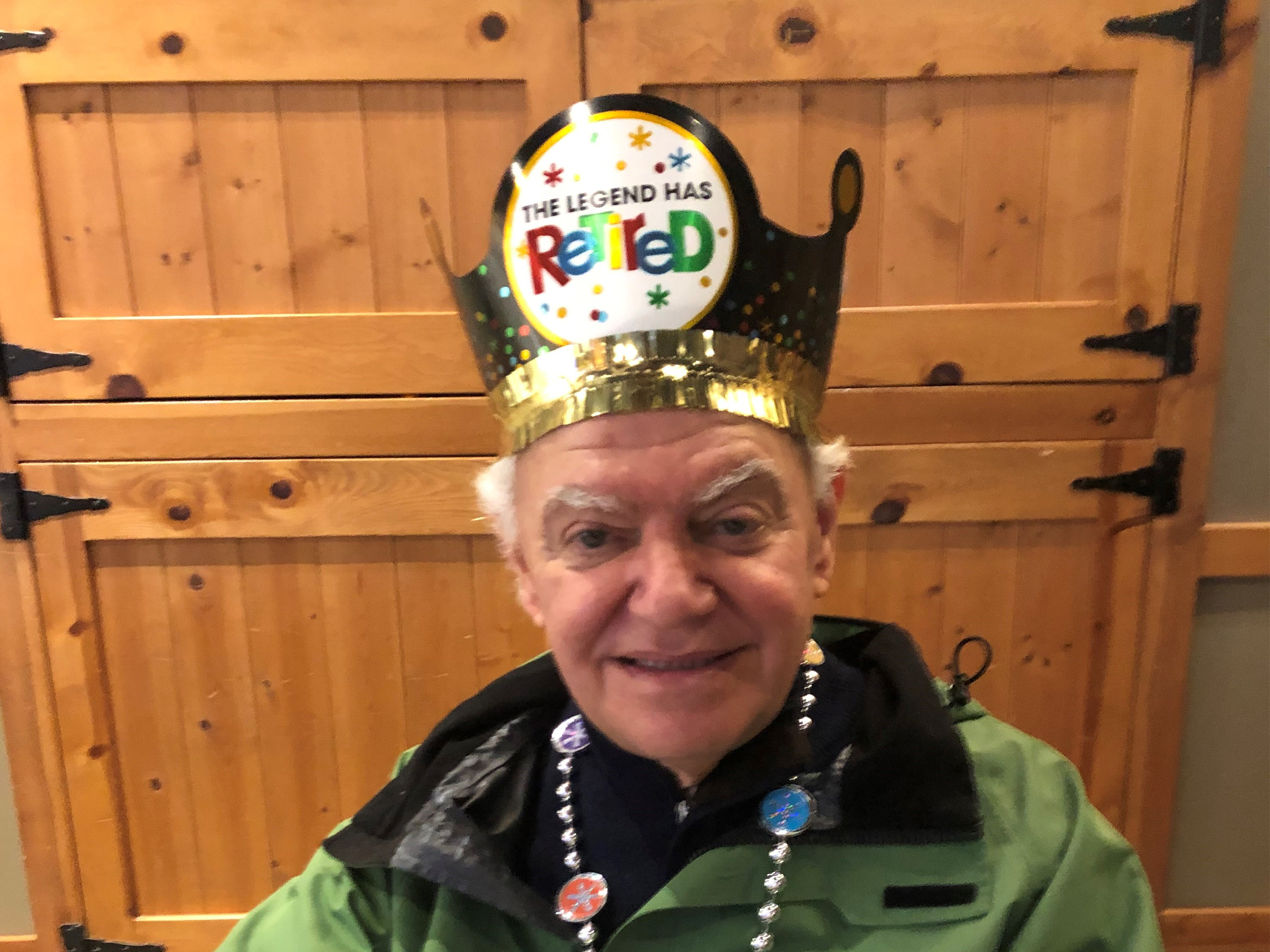 Sergio Orlando is sitting in a waiting room in clinic in Parksville, and killing two birds with one stone, so to speak. He is about to answer questions from the medical people. He is currently answering questions from a journalist.

As a man grappling with Parkinson’s disease, Sergio feels and grasps the underlying current of importance as he waits for the doctor’s counsel, crucial information for him as faces his future. An accompanying feeling of importance exists also, as he answers a writer’s questions about his past, particularly the 21 years he spent helping to save lives as a member of the clinical team at Edgewood Treatment Centre.

It is a big week for Sergio. He celebrates his own 34th year in recovery Thursday. Wednesday he is feted for a retirement luncheon at the centre for which he is synonymous with. Today he is in a clinic. Tomorrow, who knows? He has lived his life one day at a time for so long, at this point he just does the next right thing moment to moment.

Right now, he is answering questions about how he came to Edgewood in 2001. How his wife had seen an advertisement in the paper and convinced him to call. How he hopped on the ferry from his home in Vancouver and showed up for the  back-to-back-to-back interviews decked in blue jeans.

He smiles, and remembers the tour he was given by Lorne Hildebrand, and seeing patients huddled in the common area doing mini-group assignments. How the energy in the building, the professionalism on display, affected him immediately.

“What impressed me the most when I walked in the building was the atmosphere. It felt safe. It felt like a family. Right away I felt part of it.”

It didn’t hurt that one of the people in the interview process was Brian Cohoe, who was the director of the family program, which came to be known as Insite. Like Sergio, he was a golfer, so there was plenty in common right away.

Sergio  was a natural fit for Edgewood. He had double digit years of recovery in the 12-step world and had years of experience counseling at treatment centres in Montreal and Surrey. But make no mistake – to get the gig, he would need to pass the discerning eye of Edgewood co-founder Jane Ferguson.

She posed an ethical question to Sergio, a hypothetical scenario whereby a patient had a highly socially contentious and controversial mental health issue. What would you do if he was your patient, Ferguson asked?

On the spot, without blinking an eye, Sergio responded.

“Well, I would start by talking to my supervisor,” Sergio recalls saying.

That simple answer, the display of clinical humility, of knowing the importance of checking with the team, was all Ferguson needed to see.

“Jane said ‘no more questions’,” Sergio recalls, having heard enough. She called later that day. He got the job. And Sergio’s legacy on Boxwood Road in Nanaimo was launched.

His career and personal growth are integrated. Edgewood has a way of doing that with its staff.  There is nothing a counselor would ask a patient to do unless he or she was willing it to do themselves, including making beds. When a patient left, often the counselor would find themselves changing the linen of the one who had completed or walked out, a circle of closure if you will. Sergio made his share of beds.

The freedom to give and get feedback was also important. Family was particularly  important, too.

Sergio attended the family program Insite as a condition of employment. However, he misinterpreted his invitation to attend Insite, and thought he was supposed to lead the program. He showed up with his counselor’s hat on, and soon learned no, he was to do the transformational program as a client. His experience was profound.

“I had all these years in recovery, but this was different. I felt so cared for, even though I was very nervous.”

He remembers doing his Wall assignment and receiving feedback in the form of a block of arrogance. It was a characteristic he has often come up against, especially in the early years.

He remembers the steep learning curve of being a counselor under the tutelage of brilliant clinicians like Jane and Dorcas. They were blunt and honest, sometimes hurting his pride. But he knew they were right.

“I was 13 years in recovery, don’t tell me,” he says with a smile. “Dorcas could see it. She called me on it. I used to hate her for it, I wanted to run. But I always felt I was in the right place.”

“I came there and thought I had to perform. I had to pretend I knew everything. I was like a chicken with his head cut off.”

One weekend, he made a significant clinical decision without checking with his team first. Jane found out about the decision.  He spent Monday avoiding her at all costs but was confronted about it in the next staff meeting.

“Jane says I have a lot of passion, but passion can be a curse or a blessing. Stop trying to avoid me!” she said with conviction. “She was saying I am a good counselor; I belong here, but here – we work together. She was talking to the team, too.”

Looking back on his career in the “House of Miracles” (a term he says one of his patients came up with), Sergio has many fond memories, and poignant moments which stay with you for life.

For instance, the plane crash which killed Ferguson, her partner, her niece, and her dog Rascal, in 2003.

“My heart just stopped. I was frozen. Crying. It had a great impact on my life,” he recounts. “I never really talked about that. She was my mentor. She taught me what it was to be a man. To take responsibility. We lost our friend.”

In the weeks following the crash, staff were reeling. But out of the dark often comes a new light.

Sergio  quotes the familiar Narcotics Anonymous saying, “As long as the ties that bind us together are stronger than those that would tear us apart, all will be well.”

“We bonded as a family,” says Sergio, of the post Jane Ferguson years, and into the EHN era.

Edgewood solidified its reputation as a powerful force for good in the world of addiction treatment and Sergio was a big part of it. The alumni list grew as patients and families grabbed onto the branch of hope available in Nanaimo.

He has many fond memories of conferences attended, in Vancouver, Calgary, Montreal, and once where he got to play golf at PGA West in La Quinta, California. (Anyone who knows Sergio knows how golf has long been one of his major life passions.)

Sergio smiles at memories of snow fights, car rallies, ice cream road trips, Christmas parties and hilarious skits – one which found him dressed in drag, while at another where he transformed into the rapper .50 Cent.

“I was wearing chains and giving everyone the finger,” he laughs.

Another one of his passions is, of course, food.

“Some of most profound, most sociable, enjoyable moments of my life were when we would go out to dinners with staff,” he says.

Again, the Edgewood spirit of silliness was usually on display.

“We would tell everyone we were from Walmart, not Edgewood.”

The list of staff he has worked with are too many to risk leaving a name out. They were all key connections for people trying to achieve recovery.

“They would go into every situation and the patients always felt like they were heard,” Sergio says proudly. “When something was going on, we all just got involved. We never left anything as a secret. Everyone was responsible, from the cleaning lady to Jane.”

It was never difficult to love those who came looking for help, he says quietly.

“What the patients do for me is teach me the importance of how to be with another human being no matter what he is going through,” he says. “I saw their spirit. A gentle spirit. I never had to be scared of a patient.”

Looking back, Sergio doesn’t know what would have become of him had he not found Edgewood and the welcome to join a family he grew to love deeply.

“You know, a family of origin, you have no choice. But a working family, you have a choice,” he says. “In all my experiences working, I never had a family like this. Getting a hug every morning, people taking time to listen to you, support you, make you feel part of it. You don’t feel like an employee, you feel a belonging.”

At 74, Sergio is now settling into retirement in his beloved adopted hometown of Qualicum Beach. He lives just up a hill from a quaint, 109-year-old golf course, a great restaurant with a spectacular view of the Salish Sea. Some days you can find him chipping and putting, munching on good food, and chatting with anyone nearby.

That is who he is, how he rolls.

He is talking about organizing a Step Study group, attending meetings (one is a 10-minute walk from his door), and continuing to do what he can to help others. He may have left the building, but he is still reaching out to others, helping them find their path to recovery.

It should be no surprise. In the end, helping others has always been the calling and absolute joy of Sergio’s life.

One thought on “Sergio’s Journey To Retirement”