Canadian Veteran Derek B. Crosses Bridge to a Better Life

Canadian Veteran Derek B. Crosses Bridge to a Better Life 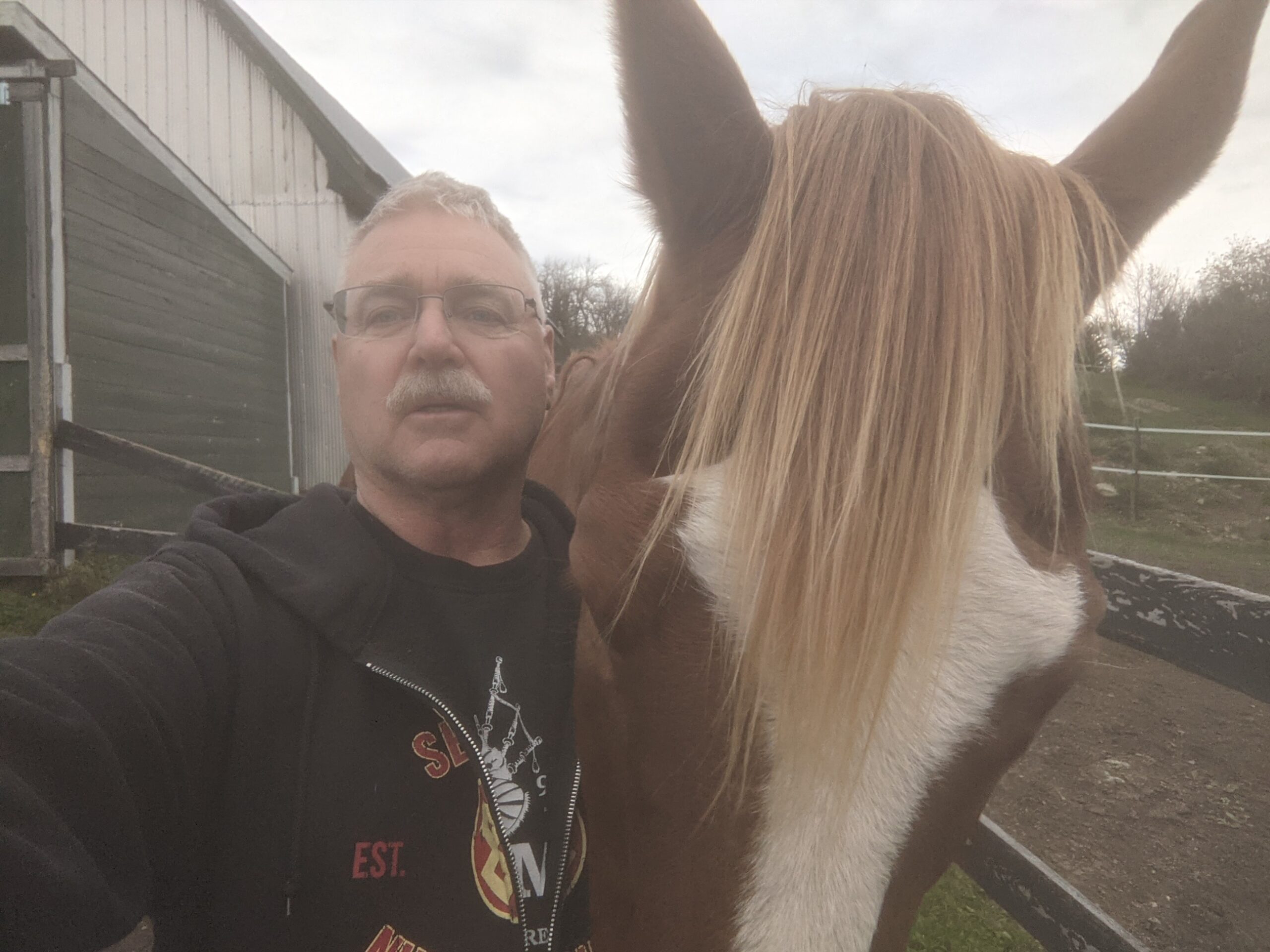 Derek B., pictured above with his favourite horse, Elvis, who he says helps to relax and ground him.

On November 11th, Canadians will pause in a moment of silence to honour and remember the more than 2.3 million Canadians who have served and continue to serve in times of war, conflict, and peace.

Remembrance Day, originally known as Armistice Day, was first observed throughout the British Commonwealth in 1919 to commemorate the armistice agreement that ended the First World War on Nov. 11th, 1918, at 11 a.m. In honour of Remembrance Day, we had the pleasure of sitting down with Derek B., a 36-year veteran of the Canadian Armed Forces and fellow Alumnus.

Born in Birmingham, England, and later relocating to Halifax, Nova Scotia with his parents and younger brother, Derek remembers his childhood as fraught with instability, “my parents split up when we moved to Canada. I was around 7 or 8, and we ended up moving around a lot due to my mom’s multiple marriages. This made it really hard to form lasting friendships.”

Despite this adversity, Derek said joining the Air Cadets at age 13 made a lasting positive impact on his childhood and he still keeps in touch with friends he made in the program, “I have fond memories from the Cadets – flying, camping, you name it.”

It was also during this time that Derek began to exhibit signs of a sex and love addiction that would affect his life for years to come, “I had a lot of girlfriends, and my belief system was skewed, I believed sex equals love and love equals sex.”

In reflecting on the past, Derek believes his struggles were largely rooted in childhood trauma. One of Derek’s stepfathers was mentally abusive, while another would lash out at Derek physically. During his time in treatment, Derek also came to realize his mother was a key enabler of his addiction and the way he viewed relationships with women.

“She was a free loving person throughout the 60s and impressed these values on to me,” said Derek. “Throughout my teen years and my newlywed married years, when I would be promiscuous, she made me feel like morally, I wasn’t doing anything wrong.”

Upon completing treatment at Bellwood, Derek sent his mom an email detailing the enabling behaviour, describing how it had harmed him, and establishing boundaries for their relationship going forward. He communicated in the note that he wasn’t seeking a response, but she proceeded to “one up him,” as described by Derek.

Derek’s relationship with his mom today is strained, though they did speak earlier this year on Derek’s birthday. He also connects with his biological father about once a year, but it was his mom’s husband George who Derek considered to be his true father figure. Derek describes George as a caring and attentive man who was a very positive influence in his life.

Sadly, George passed away a few years ago from cancer, and his passing hit hard. “When my brother and I were in the military, my mom married George and he became my stepdad for 26 years. I called him dad and he accepted us as his sons. We loved him for who he was and how well he treated our mother.”

After his time in the Air Cadets, Derek joined the Canadian Army Reserves, and from there, built a 36-year career in the Armed Forces where he was deployed four times for up to six months at a time. His career included bravely serving in both the Gulf War and the War in Afghanistan.

He said some of these experiences felt overwhelming, and in addition to having two affairs, Derek recognized he was beginning to drink a lot, “I realized I was drinking too much alcohol, and this had to stop. However, when it came to sex and love, I still didn’t realize I had an addiction,” said Derek.

Derek’s addiction continued to escalate, and he began to compulsively engage with online pornography and dating. “I would walk downstairs in the morning and tell myself that I wouldn’t do it today. However, within ten minutes after breakfast, I would be doing it again. This is when I began to understand I had a problem.”

Derek’s rock bottom hit when he enticed a person over for sex, and his wife gained access to his emails and saw that he was speaking with several women he met online. In the same time period, his wife came home early from work one day to find Derek watching pornography, “I had a nervous breakdown at that point,” recalls Derek. His wife then confronted him with an ultimatum – “you’re either getting help or getting out.”

This prompted Derek to seek help from mental health services available at the military base. The first counsellor he saw didn’t provide effective treatment, telling Derek he should simply stop the behaviour. Often misunderstood, sex and love addiction is a complex condition rooted in early childhood trauma related to neglect or abandonment. Like all addictions, treating the condition involves far more than mind over matter.

Derek then saw a certified sexual addictions therapist at another military base who suggested he consider Bellwood’s Sex and Love Addiction program which applies an evidence-based approach to address underlying factors and triggers. “It took me about six weeks of sessions with my therapist to finally say – ok, I’ll do it,” he said.

In 2015, Derek entered treatment which he describes as the hardest thing he’s ever done in his life, alongside serving in the Gulf War. Derek now sees this decision as one of the best he’s ever made. “The bridge is truly symbolic – it transports you to a safe place where you can share your story without judgement. It’s a bridge to a better life.”

Derek was nervous at first, but he spotted a friendly face in the crowd. A person who had entered Bellwood to seek help for occupational PTSD was friends with Derek’s younger brother, “we got along right off the bat and were like brothers throughout our treatment.”

Inpatient treatment provided Derek with routine and structure, and most importantly, a safe environment where he could access treatment, bond with a community, and engage in positive activities. He was particularly motivated by yoga instructor Sean S. who himself had served in the Canadian Army Reserves. “He came to work one day wearing a Yoda t-shirt and a headband from the karate kid – that really spoke to me. Sean was fantastic and got me doing yoga for the first time in my life.”

Derek said he ended up enjoying his time at Bellwood so much, he didn’t want to leave at the end of his six-week program. He is now five years sober and is enjoying many gifts of recovery.

To maintain his sobriety, Derek attended a sex and love addiction booster program when he lived in Ontario, but at his new military base, financial support is not offered for booster programs. “Many veterans on the base require access to group counselling and rehabilitation, and the military is slowly coming around to offering treatments for sex and love addiction,” he said.

He regularly engages in the hobbies he loves including playing the bagpipes. He’s also discovered Buddhism which has helped him find peace and believe in himself. He enjoys a close relationship with his two sons aged 28 and 31 who love their dad unconditionally and have expressed forgiveness and understanding. He continues to work on his relationship with his wife while building trust through his commitment to sobriety.

When asked what he feels has been the greatest gift of recovery, Derek says: “I’m not so angry anymore and my anxiety is gone. I can now deal with stress because I know how to deal with myself. I constantly take a self inventory and recite the serenity prayer every morning.”

Derek said he knew he was a changed man when he recently received some devastating news and turned to meditation to cope, focusing on what he could control in the situation. He’s excited for his future and will soon be retiring with a full pension and starting a new career with the Commissionaires. “I’m now free to focus each day on becoming a better me.”